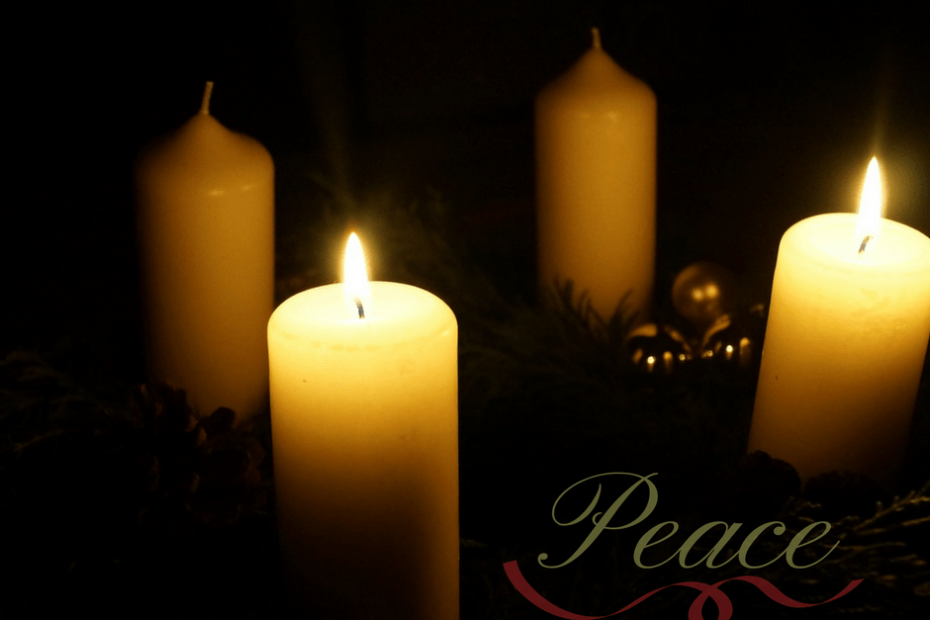 I worked Monday this past week and took off Tuesday because Elise was in two performances at the Kravis Center. Dreyfoos School of the Arts’ annual Prism Holiday music concert is not to be missed, if you can get tickets. Tuesday was about the performances. I put away my church work and went to hear and see the concerts. Between them, I went home and did some shopping for household items, made a little lunch, and then drove back with Marit, mom and dad, and saw it again. It was a very pleasant day, as you might imagine. It was in some ways a peaceful day. That’s because mostly we define peace as a cessation, as a stopping of, well, of obligations, duties, responsibilities, haste, panic, anxiety, problems. It’s always been a little tough to define peace in a positive way. It’s easier to say that peace is not what we feel when we’re stressed or burdened or under fire or in conflict.

I will have peace, we may think, when I retire. At least those who have yet to cross into the golden age of no work think this. Some consider their childhood as the most peaceful time, when they didn’t have responsibilities, when they were carefree, and had none of the pressures of being a hormonal, confused, socially vulnerable teen, or an adult with job and bills weighing on them, or an anxiety prone parent with others to be responsible for, to keep safe, and make decisions for, or an aging adult with medical issues.

Most think if you’re wealthy you’re going to have an easier time being at peace or peaceful than if you must work two jobs, can barely pay bills, and worry about when the car tires need to be replaced because you don’t know where the money will come from. Being at peace seems to be easier for some men or dads who don’t shoulder as many of the day-to-day concerns of children or the house or the bills, perhaps think many women, moms or wives. Turning on the TV is more peaceful than getting one’s hands and heart dirty sorting through clothes, deadlines, registrations, schools and studies, shopping, meals, kids’ feelings, they believe strongly. A dad may think mom has it easier since someone must keep a level head around the house and make sure things don’t fly off the handle. (By the way, I said “some” and “may,” because this is stereotyping.) The list of peaceless living could go on.

We would love to be without burdens or worries, but we know this can only be managed for short spans of time; being this way often means being less than fully engaged in life and comes with a price of a less than

productive existence; and yes, we want to be active, productive, dynamic, and energized. If peace means a passive state leading to boredom and inertia, it’s not to be favored over an active if more anxious life. After all, God labored six days so hard that the seventh meant time out, a sabbath. Sabbath, as a day of rest or a day of peace, comes after six days of productivity, according to God’s original, high-end standard. Now, it’s not the number that matters, so don’t get caught up in that. Rather, it’s the idea that God isn’t a Greek god who sat around on a Mt. Olympus and did nothing but make life hard for humans. The Lord our God does, produces, creates, engages.

If you think about it, I’m not sure how “peaceful” God’s life has been. Got those first six days, one day off, and made friends with Adam and Eve. For a while, things were going well, true, that is, until the kids got together and went teenager-y on the Lord and did something that upset the whole apple cart. After rebelling, they moved out, had children the natural way. Cain killed Abel, and soon, there were a whole lot of people; then God lost it and let loose with a flood, after which, she vowed never again. I could continue, but you get the idea. So, things haven’t been that smooth either for God.

Peace isn’t that easy to come by when you’re alive, learning, losing, loving, longing, languishing. But what choice do we have when we don’t want to sit around and do nothing, when we want more than being passive and unproductive. Peace is part reward for doing good, part feeling or mood when we slow down and let go, part decision or choice when we prioritize a non-conflict action, part perspective as we look at possibilities, part good genes as some seem to come from calmer stock, part God’s grace because much has been made that God’s peace passes all understanding. I wish I could say it’s all God’s grace but it’s not possible to be a peaceful person if you don’t have a good perspective, if you don’t make peace-building choices, if you don’t value calmness, if you don’t seek your reward being a steadiness rather than constant unrest.

I know there are times when you hear that God will give you peace, but if we’re not buying what the Lord’s selling—if I may use a slightly inappropriate metaphor—then we can’t receive what God’s gifting. Too often, we’re those who bring the fight; we’re not pulling back on the punches; we cause the turmoil, uproar, and discontent. So be ready: if you give, you’re going to get. Stir up the pot and it’s your stew you end up eating. Let us look to what we’re saying and not saying, doing and not doing.

Don’t point fingers and say, “He (or she) started it. I’m just finishing it.” Blessed are the peacemakers, Jesus said. It’s not easy being one; it’s just important.

Our scripture readings beg us to seek a different way, the way of peace. But there is a fury in the human heart and mind. There is a furiousness that so many manage but just barely. How quickly a fire is ignited and how our hearts burn. Today, many are getting carried away, finding paths that justify a resentment and wrath that will do nothing but burn things down. Stoking rage and storing grievance takes us far from the Gospel, far from Christ, far from hope. Pay attention to your anger level. Don’t join in with others. Let us build bridges of peace within and among us. Let us form a church of peace, reconciliation, prayer. Let us learn and teach at Church on the Hill what makes for God’s peace, like our scripture says, “In days to come the small hill of the Lord’s house called Church on the Hill shall be established as the highest of hills in Boca Raton; that God may teach us his ways and that we may walk in God’s paths.” Well, not exactly.

We say opposites attract, but in truth, too often opposites fight. We too easily put ourselves in opposition to another when an easier, calmer, way, a more peaceful way could be found. I was driving to church Thursday morning on 95. The traffic had gotten better south of Congress, and I was in the fourth right of five lanes. The fifth lane there starts at Yamato on ramp and ends at Glades off ramp. I was going 60 mph and a semi behind me was catching up. The lane next to him had some traffic in it so I knew it would be a little tough for him to switch lanes to get by me. But I got to tell you for a moment I was like, “It’s my lane. He can go around.” That was when I saw to his left it was a little busy, but to my right was nobody. Of course, I could have stayed where I was. But you know we car drivers change lanes regularly, including sometimes right in front of semis. It’s a lot less for me to go from one to another than it is for a semi driver to deal with it. I moved over into the farthest right lane until the semi passed and then moved back. Was he happy I did? I can imagine it made his life right then just a little bit easier. He probably experienced a bit of gratitude; maybe even a slight uptick in his trust in humanity’s goodness. It doesn’t take much for us to be impressed by someone doing something good unexpectedly. It was my pleasure to help, not that I always succeed in giving people more reason to have hope.

Give way more readily. Surrender prerogatives, so things flow more easily in your life. Opposing others may seem to be the thing to do, if only on principle, but that’s a thin cracker to live on.

We’re not good at keeping control of so much. It makes us anxious, a little loony, hard to live with. Yeah, that was my lane, but so what. Gaining some peace doesn’t come by sticking to one’s guns no matter what. Doing better, charting a peaceful course requires give and take. We don’t need to claim the right of way. We can be more settled than we are.

But it’s not all up to us. We need to make room for the Lord to bring peace. Our Gospel reading shows us Joseph, someone who didn’t have it all figured out. He accepted he wasn’t in control of everything. He was going to let Mary go and not make a big deal of it. Quite a gentleman, a man of peace. Then he got an angelic word that his son was special. He didn’t know what it meant exactly, but he was willing to do his part. So, he kept to his purpose. He would be a dad, and hopefully a great dad. It seems like he was. But he knew it wasn’t all in his powers. He made room for God to do something.

Find a path to let the Lord take over more. Don’t reach so far. Curb your enthusiasm for controlling outcomes, managing others, determining what must happen when. Let’s pull back from playing master, captain, commander, general, know-it-all, grand high poobah. It’s not bringing us what we need. We’re not in any more control and we’re not bringing peace to ourselves or others. We can do good things and let God do the rest.

In Advent we lift the prince of Peace so we can see again that our pursuit for peace must always continue. Christ taught and lived peace. This peace is needed by us and by the world, in our hearts, among our neighbors, across political divides, and between nations. Let us build a peace from the power of empathy for each other, and especially the needy; from a willingness to make room for others, especially when they need something more; and from a trust that God gives strength to those who live as peacemakers, especially in a time fraught with anger and fears. We are a people of peace.