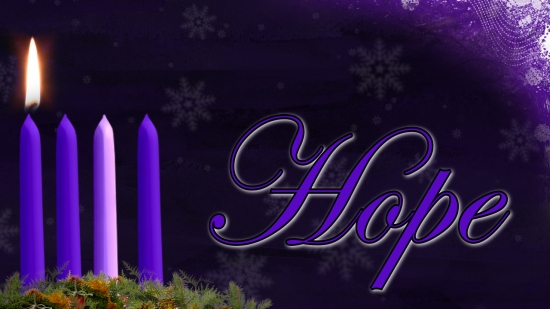 In the movie “Talladega Nights,” actor Will Ferrell plays a NASCAR driver named Ricky Bobby. Before sharing a meal with family and friends, he clasps his hands, bows his head, and begins his prayer, “Dear 8-pound, 6-ounce newborn infant Jesus.” When his wife questions his prayer, Ricky Bobby replies, “Well, I like the Christmas Jesus best.”

The prayer is meant to be funny, with over-the-top descriptions, but there’s a note of truth in it, too. Many worshippers come to church on the first Sunday in Advent liking the Christmas Jesus best. It’s not simply that our culture shifted into Christmas frenzy weeks ago. People are looking for hope after yet another long year of the pandemic and the divisions in our society. So many are tired, and they’re tired of being tired.

Of course, we will eventually arrive at Bethlehem for that holy night, but before we meet the Christmas baby Jesus, today we hear the adult prophet Isaiah say some very unusual things. Our scripture this morning asks us to imagine a time when the lion shall lie down with the lamb. “The wolf shall live with the lamb…the calf and the lion and the fatling together, and a little child shall lead them.” I don’t know about you, but I find that hard to imagine. I mean for goodness sake my two cats don’t even lie down together in peace. The wolf living with the lamb? Bears grazing with cows? Children playing around poisonous snakes? Come on, get real. This is not the way the world is.

“This is not the way the world is.” There’s the rub. Right here is the edge, the cliff, you might say. If that’s too dramatic, how about the turning point? Hope is the turning point of the heart and the world! Let me put it a different way. The world wasn’t like what Isaiah foresaw in his time and still isn’t now, nor will it be in the future. Or will it? Can you declare for certain that the future must be the same as today or the past? How do you know?

Either, one says what was then and what is now shall always be and turns away, resigned to ever recurring human tragedies, unstoppable misfortunes, continual wrongs, perpetual heartbreaks, injustices shrugged at,

thereby receiving in one’s spirit and soul a defeat irreconcilable with the Gospel, Christ’s ministry, and God’s will; or, one refuses to walk away so resigned and hopeless, but rather crosses over to see the future doesn’t have to imitate the past nor follow the present, and instead proclaim that the seemingly impossible is possible, that yes, slaves can be freed from Egypt; a prophet can live three days in the belly of a whale; those stricken with blindness, demons, leprosy can be healed, can see again, be whole again, to announce—and here’s the most impossible of all yet the centerpiece of Christian faith—that the dead will live again. Hope is the turning point.

The Bible is cut from one cloth. It’s outrageously consistent in its refusal to be discouraged. Open scripture to any page and you will read such a stubbornness against resignation, such a will to courage, that once you see it you may never be able to read the good book the same way. Hope is the torch that has been passed down for almost four thousand years. It is in our hands now. Don’t blow out your candle. Keep the flame shared with you burning. Make your light strong enough so it lights others whose flickering flame of hope needs lighting.

Isaiah lived in a time of turmoil. He was a contemporary of Micah, whom we looked at a few weeks ago. Both were prophets in the southern kingdom of Judah. The nation had seen a procession of mostly lousy rulers. Corrupt kings who turned their backs on God, which meant in real human terms, they had no concern for the little people, for justice. Corruption and self-serving, incompetence and lack of community ruled Israel for reign after reign. The nation was now reaping the fruits of turning from the Lord and good. But during all this, Isaiah has a soaring, wonderful vision of what God would do and of what could happen. Isaiah was able to see beyond the immediate moment to a bright future.

To have bigger imagination, to see beyond present configuration, to hold to a time when God’s reign becomes real is what hope means. Those who believe in the wonderful can grasp the width, depth, and breadth of God’s will for this world.

Nonetheless, in whatever way it’s said, it always sounds outlandish. Still but hopefully not always, the visionary is ahead of her time and appears out of his mind, like a poet or a prophet or an inventor or an artist. May your hope make you bigger, see more, believe larger than what others find can be true.

In this season of Advent, we celebrate the hope we have in Jesus, who showed us there is no situation nor person beyond the reach of God’s love and grace. The loss of a dream, the loss of a job, the loss of a relationship, even the loss of a life, is not the last word. Outrageous hope!

Isaiah foresaw a ruler who would be unlike any Judah had seen: “The spirit of the Lord shall rest on him, the spirit of wisdom and understanding, the spirit of counsel and might, the spirit of knowledge and the fear of the Lord…with righteousness he shall judge the poor and decide with equity for the meek of the earth.” Isaiah saw a glorious future that God had prepared, and at the least likely time, he shared a word of hope. We read this scripture during Advent because we’re reminded that at the least likely moment, in the most unlikely way, God broke into our world. Even today, in unexpected places, at unexpected times, through unexpected events and people, God does the same.

Now, it can be hard to take hope seriously. These are not especially hopeful times. How troubled and troubling so many are and feel. Let’s face it, our culture doesn’t value poets or prophets, like Isaiah; it values realists. Our culture says, “Wake up and smell the coffee.” If it’s real, it’s there to see, right in front of you. Those who have dreams, those who have ideals, those who hope for something better, can be seen as naïve and overly optimistic. Isaiah had some pretty words that make nice Christmas cards, but what he needed was a reality check. That’s one view.

One person said, “It’s odd that those of us who are still able to dream of something better than present arrangements should be considered naïve…. It’s those who are adjusted to the present, who feel no restless discontent with things as they are who are simple and naïve, believing that this is the best of all possible worlds. There is, in fact, a reality beyond what we can see right in front of us. There are more possibilities, more alternatives, than what we can even imagine.”

I heard a story recently about a church that had declined to the point where it really couldn’t stay open anymore. They only had a handful of members, and the bank account was running down. They decided to go out with a bang. They took their remaining funds and decided to hold a big barbecue for the neighborhood, kind of like a going away party. They

dropped off flyers, invited all the neighbors, and the extended church family such as it was showed up for one last hurrah. It was advertised as a free barbecue for the community, for anybody who wanted to come.

The little group was surprised when quite a few of the neighbors showed up. Some hadn’t really noticed the church before or hadn’t paid attention. The church put on a nice feed, people visited and had a good time, a couple of people sang for a little entertainment segment. Some of the neighbors wanted to make donations to help pay for the meal. “Oh, no, it’s free. We’re just glad you came,” church members said. But people insisted. It wasn’t just one person; it was many. So, they reluctantly accepted the contributions. It turned out that they made more in contributions than they had spent on the food.

They decided to do it again. They wanted to spend down their remaining funds so they could close. The next month they put on another neighborhood barbecue. Even more people came. Everybody seemed to enjoy themselves and again, without asking for anything, people donated, and they made even more money.

Now some asked what time church services was. A few showed up. They kept doing neighborhood barbecues, and people kept coming, and more of them started coming to church. It had looked like it was over, and the church had really made a good faith effort to close, but they failed.

A shoot grew from the stump of that good as dead church, and there was new life.

Isaiah painted a picture of a transformed world. He spoke of a place where there would be neither predators nor prey, a world where there are no scam artists who take advantage of seniors; no pedophiles who abuse children; no drug dealers creating addicts; a world where bullets aren’t used to settle disputes and where the strong do not take advantage of the weak. There will be no corruption; the vulnerable won’t be in danger, and those on the margins are welcomed and included. And, the prophet says, a little child will lead them.

In this season we look to that child born in Bethlehem, who came to bring hope and show us a different way—who proclaimed hope and eternal life in the face of loss and death. The vision may seem far-fetched. It certainly runs against the way things are looking now. But you know what? I’m betting on hope and that child.