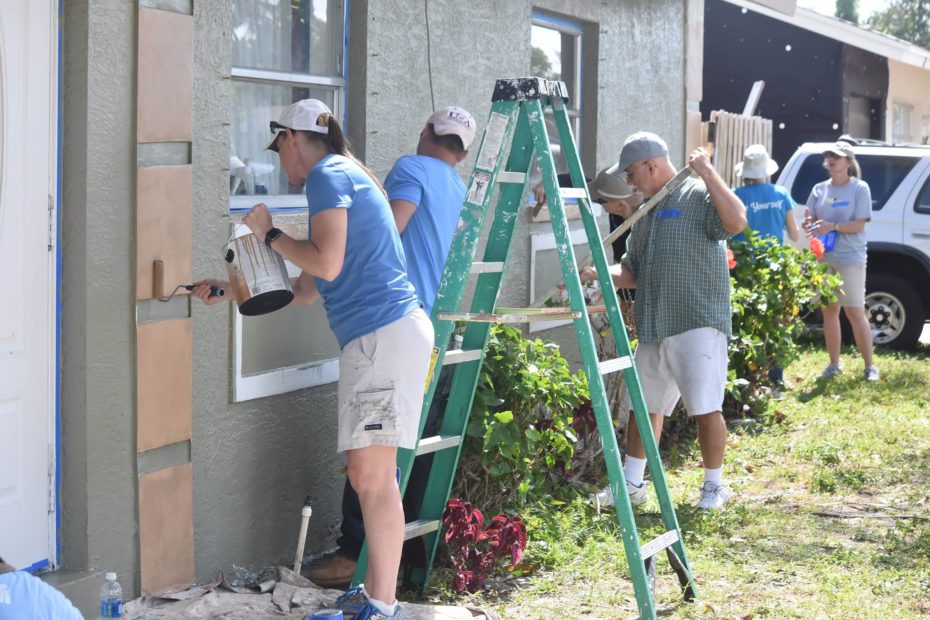 It is after the resurrection. Jesus appears to his disciples and what we have this morning are Jesus’ final words to them, to closest to him, who followed him. This passage is known as the Great Commission. The Great Commission is a call to take the gospel to the world out there – to all nations.

Someone has to do this. Jesus hands off this job to his disciples, who have gathered in Galilee, their home turf. They arrive at the mountain where Jesus had told them to go, and when they say him, it says, “(t)hey worshiped him, but some doubted.” It’s even more interesting in the original Greek. There’s no modifying word “some.” They worshiped and doubted. We understand it to be “some” doubted, but it doesn’t say that.

What do you do with that? How is that possible? How can anyone standing in front of Jesus on a mountain in Galilee after he was crucified, dead, and buried, and resurrected, then doubt? What’s there to doubt?

In the Gospel of John, Thomas doubts and gets the bad rap as Doubting Thomas, but that’s because he wasn’t there when Jesus showed up by walking through a wall apparently. John doesn’t say any of the disciples present when Jesus showed himself doubted. When the risen Christ showed up a little later and Thomas was present, his reaction was basically, “Holy moley! My Lord and my God.”

But even then, if we just take a moment, even then in John’s Gospel, Jesus shows up right in front of Thomas and still has to say to him, “Do not doubt, but believe.” After Thomas believes and says so, Jesus congratulates him half-way because while he believed when he saw, “Blessed (moreso, it appears) are those who have not seen and yet have come to believe.” This is the amazing part.

So, the conclusion has to be that even when disciples saw Jesus resurrected, they didn’t believe. They doubted to some degree or they didn’t recognize Christ. The disciples who see the resurrected Jesus don’t always believe, or Jesus disappears in front of them as happens in Luke’s most famous resurrection appearance story. Isn’t that surprising?! But this isn’t true of all disciples, or rather followers.

All this makes the stories involving women even more pronounced, outstanding, different. The women see him, recognize Jesus almost immediately, and, when they don’t immediately recognize him, it’s because of overwhelming grief and crying, not because of doubt. The risen Christ is so much more solid and obvious to the women than he ever is to the men. You can never imagine Matthew writing Mary worshiped but doubted. When

he writes in our English translation, “they worshiped him; but some doubted,” you know it’s not the women who are doubting. They’re not part of the “some;” those are men.

We can wonder if women disciples were in it for a labor of love, while the men were disciples from the view for Jesus’ teaching or authority he could grant them. Of course, women wanted to learn. Mary Magdalene, John says, calls Jesus “Rabbi” or teacher when he sees her in the garden after he’s risen. But it was James and John who ask Jesus to be given the best seats of power or authority he could in the coming kingdom. You know that request was never coming out of any of the women’s mouths.

When we do something from love, when we do it freely, without a need for return, we are more connected to what we’re doing and to the person we’re doing it for. When we’re involved in something because we’re trying to acquire a skill or knowledge or be given something in return, the relationship has a beginning point and an end point. We get what we came for, or we don’t, and we leave unsatisfied. It’s a transaction. There’s an accounting, and a payoff, or we hope to get paid in some way.

When you think of Jesus and his ministry, there’s no doubt it was a labor of love. He did what he did not because he wanted to get something from it. He did it all because he had something to give. His female disciples were in it with the same sensibility, the same motives. It was a labor of love, not of payoff. Love doesn’t end when someone dies. It continues. When someone we love dies, they don’t end. They continue with us. Christ’s life and meaning hadn’t really ended when he died for the women. His resurrection was more obvious or possible to them.

How much do you need to get and receive? How much are you willing to give, share, to surrender for another or others? Some people have one hand open to give but two open to receive. What they give must be made up for in what they get back. Their thoughts revolve around whether they’re account is full or whether it’s empty; if they’re being drained or being filled. What they give is to be compensated by what they receive.

But other people, or all of us in our better times, let go of such concerns. We unshackle ourselves from transactions to love better, to look out for another without regard for our due, our return. Sometimes the table is slanted toward another and slants away from us, and good things slide from our side to theirs. But they’re happy, or they’re helped, or they’re hopeful. This is the power of those who give beyond what they get. They have touched the world, saved a life, brought joy to someone else, changed someone’s today, gave them hope for tomorrow. Their labor of love doubles

them and continues beyond them, makes them into more than they would be no matter how they got or acquired. They live more than one life. They live beyond their own days. Love makes us everlasting.

My point is you can see the risen Christ a lot more easily when you love more easily, like Jesus’ women disciples. Look for labors of love and let go of accounting for what’s your due. Claim that person or persons as yours to love. Stop seeing if you’re being compensated enough for what you’ve done. Give freely so you may receive freely. Love so you may live, fully live, and by God’s grace.

The truth is this sounds bigger and harder than it is so often. Sometimes you just have to care enough about someone else to do what they’re asking for, hinting at or need. A young man told about when, “During a lecture at university, I was seized by appendicitis, and an ambulance was called. We were racing along; I had a terrible pain in my abdomen, and I was with an EMT and my girlfriend. I was lying there, and I suddenly understood that something was missing. ‘Can you turn the siren on? This is my first time in an ambulance, and I always dreamed about having the siren on!’ The paramedic said the siren was broken. As I lay back, I suddenly heard both my girlfriend and the doctor begin to make a noise like a siren. They kept it up all the way to the hospital. I’ve never felt so happy!” See, it’s not always the big thing.

We live in a society where focusing on someone else is questioned. Each of us is supposed to be able to live our lives independent of another. But we’re bound together, and it makes the heart glad when we recognize and celebrate it. One person said, “I found out that I was pregnant. I phoned my husband, who was in the subway. I told him this was it: he was going to be a father. There was a moment of silence, then I heard him shout, ‘I’M GOING TO BE A DAD!’ followed by the applause of the people in the train.” Now that’s team spirit. We need more of that.

We often don’t know what the good we do means to someone else. We also need to be able to see with fresh eyes those we love, who are ours to live for and love. A son wrote, “Today, I chose the wrong number and accidentally sent my dad a message saying “I love you,“ which was meant for my husband. A few minutes later I got a reply, ‘I love you too. Dad.’ It was so touching. We say things like that to each other so rarely.” Love means looking at someone from a rare angle. Be willing to turn things around to start something new or different. Our connections should be growing not groaning. When we labor for love and from love, we go forward and try again.

If you’ve got people to care for, that’s a gift. Count yourself blessed. It’s huge. Don’t take someone to love for granted because one of the hardest things in life is when we don’t have anyone to love. You may be overwhelmed by how many directions you’re split into trying to keep kids, partner, colleagues going in the right direction with the right amount of kindness. But not having that or not having enough folks to love is a tougher condition to find oneself in.

We have a love impulse—this need to give and let someone else receive. Admittedly, it can be buried deep in some folks. It eludes us too often. But not to have someone else we can care about and show commitment to pains us. If you’re living on an island, by yourself, make it a peninsula. Connect yourself to a broader group. Let’s not fool ourselves that we don’t want and need to care for and love others. We all need it for ourselves, too.

You know what’s stunning is that Jesus’ disciples, the doubting worshipers, are the ones he sends to continue his labor, speak in his name, start the Church, bring the kingdom of God closer, to change the world for the better. It’s on them, the ones who aren’t completely sure of him, says Matthew, since his gospel contains both the Great Commission and the multiple Doubting Disciples. We may not be sure of our ability to follow Christ, to love others in the way they need and deserve, to spread the good news of the power of Christ’s resurrection, but that won’t make us any different than the ones who started the Church.

They weren’t perfect, and neither are we. But they were willing to love, to gather in the church for worship, to labor for the kingdom, for Christ’s name, for the good news of God’s grace and love. Let us labor for love and from love, so we can see and know the resurrected Christ is with us, and we can share him with all.